Loretta McEllhiney surveys flora on San Luis peak in the Grand Mesa, Uncompahgre, and Gunnison National Forest. As the Colorado Fourteeners Program manager, she is responsible for not only the safety of trails on 47 Colorado mountains higher than 14,000 feet, but she also has grown into an expert about alpine plants. (Photo courtesy Executive Director Lloyd Athearn, Colorado Fourteeners Initiative)

There are hikers who look to Colorado’s peaks as a lifetime goal to climb at least one mountain higher than 14,000 feet above sea level. Then there is Loretta McEllhiney.

Over the last 33-plus years, McEllhiney has succeeded hundreds of times. She has a bit of an advantage since her job with the Forest Service takes her above the clouds nearly every day between June to October, dependent on weather conditions. She is the agency’s Colorado Fourteeners Program manager: others simply refer to her as Queen of the 14ers.

“I live in the shadows of Colorado’s two highest peaks: Mount Massive and Mount Elbert,” McEllhiney said. “Massive is my favorite. It’s so appropriately named. A huge mountain with seven summits over 14,000 feet. It is massive.”

Among climbers, Colorado is generally thought to have 54 peaks soaring higher than 14,000 feet. However, that number can fluctuate. U.S. Geological Survey, which currently lists the number of 14ers at 56, has changed elevations using improved measurement technology. Of the 56 Colorado 14ers listed by the survey, 47 are managed by the Forest Service.

McElhiney's ascension to her position as mountain trail expert after a short career in nutrition and exercise physiology. She never quite adjusted to the confines of a cardiac rehabilitation hospital. So, she moved to Colorado, where a friend told her about an outdoors job repairing trails.

Loretta McEllhiney surveys a rockslide and its effect on trails. After 33 years, she is an expert trail manager who has shared her knowledge with hundreds of volunteer and paid trail crews in Colorado. (USDA Forest Service photo)

For McEllhiney, she learned that the real measure of a mountain is in the personalities and nuances that should be understood yet revered.

“I have to say that when I wake up in the morning, crawl out of my tent, and take a look around, I remind myself, ‘This mountain could kill you today but don’t let it.’ Every single one of them can do that,” she said. “I have a huge respect for the mountains. There are some mountains that love me and some that really seem to go out of their way to get me every time I’m on them.”

Even when the mountain or nature strikes back, McEllhiney is undaunted. Like when she was struck by lightning. Three times. One strike burned the soles of her sturdy hiking boots right off her feet. She didn’t realize the extent of her injuries and opted to stay on the mountain because she didn’t want to leave the trail crew behind. Days later, a supervisor visiting the crew was shocked by her appearance and quickly rushed her to a hospital.

Today, McEllhiney continues her love of the mountains but with one eye on retirement. Other employees and trail teams – volunteer and paid – head up the mountains to continue her work, which is more than just building trails. Trail maintenance, construction or reconstruction takes in every aspect of the surrounding land, from flora and fauna to the errant foot pattern of well-meaning hikers.

It’s hard work, performed at high elevations in weather conditions that can change minute by minute. One trail crew, for example, moved 5,000 cubic feet of rocks and small boulders in one single season. That type of heavy lift is not uncommon. The large rocks are moved and trimmed to form steps or safety barriers. Deep pits caused by erosion are shored up. Perennial alpine plants are studied because although they are subjected to strong wind, chilling temperatures, heavy snow and torrential rain, human feet are the real threat.

“The goal of the program has always been to protect and preserve the 14ers and the user experienced on them,” McEllhiney said. "Are we really managing everything associated with that? No. That is why our partners are so important to us and the work we do.”

Of the 47 peaks on or accessed through lands managed by the agency, the partnerships she has cultivated have either completed work or is currently working on the standard routes on 42 of these mountains.

Organizations like the Colorado 14er Initiative and the Rocky Mountain Field Institute provide a deep source of support beyond trail maintenance. Both organizations, for example, are committed to education about and the conservation and stewardship of public lands. Between 2002-2012, these organizations, along with the Rocky Mountain Youth Corps, Southwest Conservation Corps and nine other groups, collectively contributed services valued at more than $15.3 million.

Crews sometimes have the occasion audience of a mountain goat while they work. (Photo courtesy Colorado Fourteeners Initiative)

When the first year of the pandemic seemed to lock people indoors, more than 415,000 people hiked 14ers on Forest Service lands. They did serve as economic drivers for many nearby mountain communities. Based on past studies, those visitors suggest an annual statewide economic boost of more than $127.4 million to local economies. Or more than $307 per hiker.

The peaks have more than 362 miles of trail under Forest Service management. Of those, about 232 are currently monitored. From 2014 to 2018, the agency completed 2.6 acres of alpine restoration, built 5.22 miles of highly technical alpine trail, and repaired or built more than 49,000 square feet of retaining walls. For some people those numbers may not sound robust, but consider the work is accomplished above the tree line, in harsh conditions and with the necessity of carrying everything to the site.

When  McEllhiney first joined the Forest Service there were only two constructed and maintained trails – the highly popular 12.5-mile Barr Trail on the east side of Pikes Peak built in the early 1900s and the 12.4-mile Keyhole Trail on Longs Peak, built in the mid-1800s. The rest were carved out by well-intentioned people who just wanted to reach a peak. That haphazard method sometimes were along perilous fall lines, across tender vegetation, or in areas where the paths created dangerous erosion, moving people to create even more tracks.

“There have been studies that prove as few as five footprints on alpine vegetation can kill a plant,” she said, adding that every step someone takes above timber line can send the natural resources into a point of decline difficult to recover. “Once we lose the plants, we lose the soil. When we lose the soil, we see gullies where there should be ground. It’s not unusual to see 5- to 6-foot erosion gullies along he trails. We’ve had some that are 20 feet deep and 30 feet across. It’s concerning when you realize it takes 1,000 years build one inch of topsoil in alpine areas.”

“Not only do we have high winds, and dry, dry, dry, but the topography for the poor plants to hang onto is amazing. Many mountains have tundra beds that are sometimes at a 45-degree angle. That’s tough living,” McEllhiney said. “But they cannot adapt to humans.”

A trails design assistant stands in an area where erosion is washing away soil from a mountain peak. Poorly made trails or areas where hikers veer off path are some of the reasons erosion is a concern on Colorado’s mountain peaks. (USDA Forest Service photo)

McEllhiney said hikers should learn where they are walking and what plants, especially endemic species, are along the trails. Endemic species are those that exists only in one geographic area, such as the Pikes Peak Spring parsley (Oreoxis humilis), a small, hard-to-notice perennial forb, or herbaceous flowering plant. The plant is threatened by erosion, climate change and trampling by recreationists. Lichens, composites of fungus and alga growing together, and moss also are found in these high elevations, serving as pollution indicators.

In the end, the only way for the mountain ecosystem to survive is for humans to adapt.

“It is extremely important that all visitors understand that each one of us has a responsibility to care for them. Some of the things we routinely witness are people walking along the edges of the trails destroying the fragile tundra, often because they do not have proper footwear for the conditions, or they want to pass someone who is going slower and for some reason don’t just ask the people to let them pass,” she said. “Every activity that humans pursue in the fragile alpine region has an impact. My job is to build trails that help to minimize that damage as much as possible.” 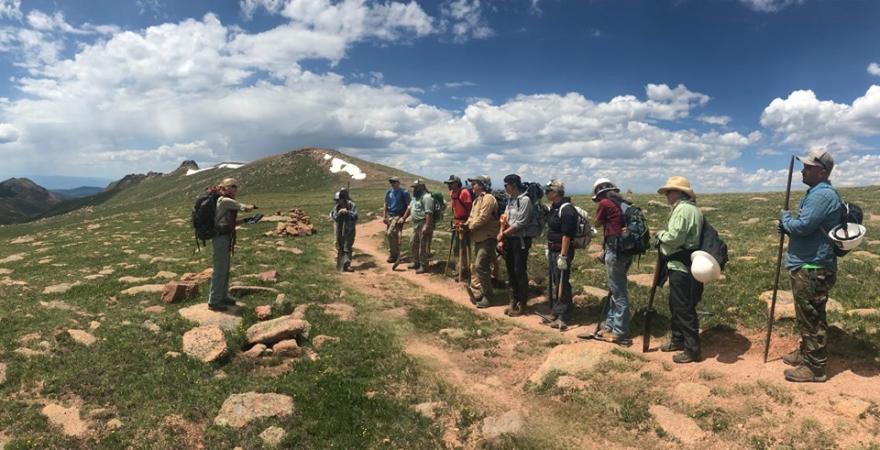